News » Costa-Hawkins and Why It Matters - Democratic Socialists of America, Sacramento

Costa-Hawkins and Why It Matters - Democratic Socialists of America, Sacramento

As the local battle to enact rent control in Sacramento heats up, so does another fight on the front to make housing a human right in California. A longtime dream of housing activists - repealing the Costa-Hawkins Act, which severely restricts the ability of cities to implement strong rent control programs - appears ready for prime time. The state legislature will hold a hearing on axing it this Thursday morning. Should lawmakers ultimately fail to kill Costa-Hawkins, activists plan to put a repeal before voters with a ballot measure this November.

But what is the Costa-Hawkins Act? More importantly, why does it matter to you? Here’s four essential reasons repeal could impact you and millions of other Californians.

Reason #1: You rent a single-family home.

If Sacramentans approved rent control tomorrow, a major chunk of renters would not enjoy the benefits of rent control. In addition, because of Costa-Hawkins, single-family home renters in Berkeley, Los Angeles, or any other California city that currently enjoys rent control do not receive the same protections as apartment dwellers living in rent-controlled units.

This is part of the reason multinational investment firms like the Blackstone Group have jumped into the single family home rental market with such enthusiasm. These far-off owners can hike rents to whatever price they please without fear of being stopped, allowing them to squeeze the maximum amount of profit from tenants without regard to the consequences on the local community.

Reason #2: You rent an apartment in a building built after 1995.

Costa-Hawkins passed the state legislature in 1995, pushed through at the behest of real estate interests by a moderate Democrat (Jim Costa) and a Republican (Phil Hawkins). The Act prevents any unit built after its approval from being covered by rent control.

This means that, due to Costa-Hawkins, as new rental housing gets built and becomes available in Sacramento - which Mayor Darrell Steinberg and other local politicians claim will be a central strategy to solving the city’s affordability crisis - none of it could be covered by rent control.

Reason #3: You’re a renter who plans on moving at some point in your life.

The way rent control in California works now, when a renter moves out of a rent-controlled apartment, the owner of that apartment can once again charge whatever they want for rent. In San Francisco, for example, this means that apartment owners often raise rents by hundreds of dollars when long-term tenants move out. Before Costa-Hawkins, though, this wasn’t the case.

Prior to 1995, if cities wanted to enact what they called “vacancy control,” apartments would stay the same price even when one tenant moved out and another moved in. Berkeley chose to enact vacancy control in 1980, so when Costa-Hawkins gained approval, the city’s tenants suffered greatly. A City of Berkeley study put the price tag of Costa-Hawkins for local renters at a painful $100 million.

Reason #4: You believe housing is a human right, and capitalism can’t provide it.

State and local leaders have told us for decades that if we just unleash the housing market from regulation, it will provide us all with affordable places to live. But under capitalism, developers will always seek to gain the maximum profit when building new units. Landlords will usually seek the maximum profit from their tenants. And real estate agents will forever try to sell rental units for the highest price possible.

If we truly want housing for all, we must allow Californians the choice of being able to exercise some control over the vicious housing markets that force people from their homes and cause them a financial burden that touches all aspects of their lives. Repealing Costa-Hawkins does just that.

If you’d like to make your voice heard on this issue, join Sacramento DSA, DSA SF, Tenants Together, the Housing Rights Committee, and a variety of other housing and tenant advocacy groups throughout California at the hearing this Thursday morning at 9 a.m. at the State Capitol, Room 4202. 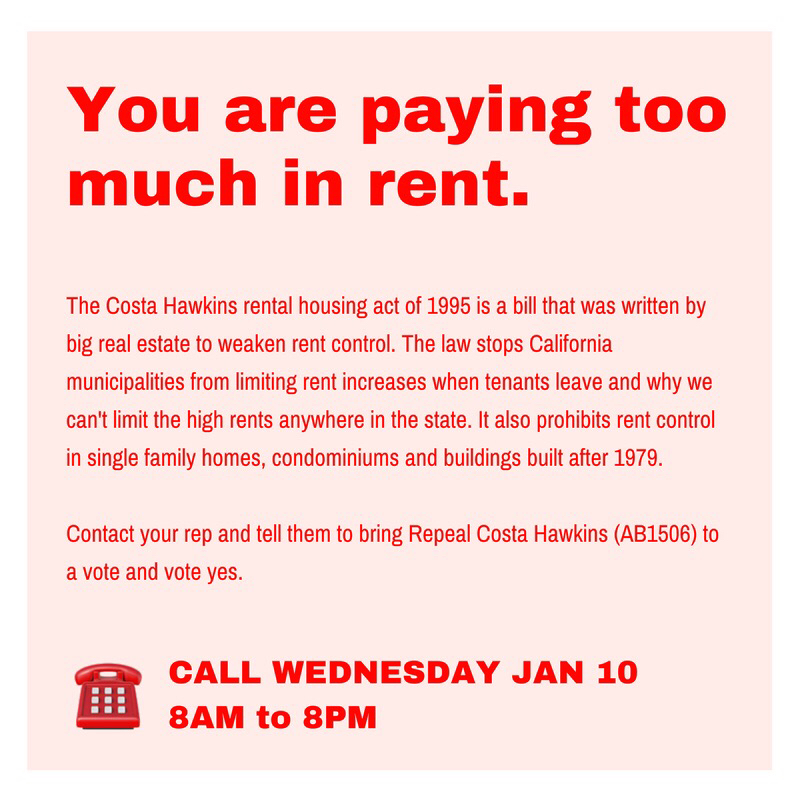 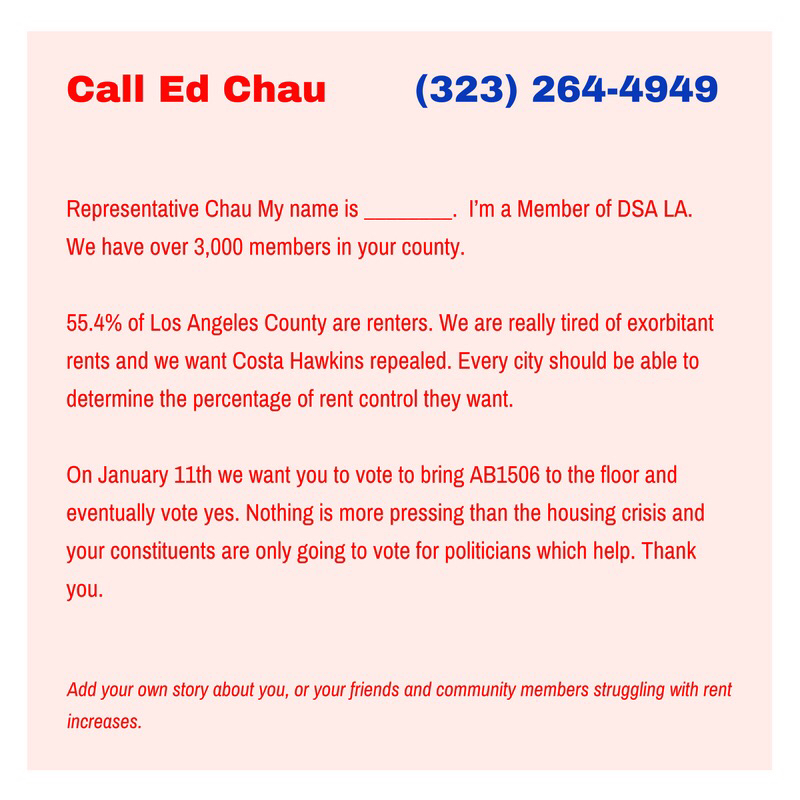