This interview comes two weeks before the California Assembly and Assembly Speaker Anthony Rendon will be holding their 4th select committee hearing on healthcare on February 7th . It is a chance for an open discussion of SB 562. For more information on how you can be a party of the rally for universal healthcare click here.

SB 562, titled the Healthy California Act, needed only the Assembly’s approval and the signature of the Governor to be enacted. However, before the Assembly could vote on the bill, Speaker Anthony Rendon dubbed the Act “woefully incomplete” and shelved it indefinitely. Prospects for future passage appeared bleak.

Yet a coalition of supporters led by the California Nurses Association (CNA) refused to give up the fight. Partnering with local groups, including DSA, organizers continue to canvass for SB 562 throughout the state, knocking on thousands of doors to build support for the bill. And at a recent meeting of an Assembly Committee charged with studying ways to expand health care to more residents, some 350 people showed up to voice their support for the Healthy California Act.

We spoke with CNA’s Public Policy Director Michael Lighty at length about the current state of the fight for SB 562. A whip-smart individual with a strong analysis of power and deep concern for the well-being of others, Lighty provided a variety of insights and a few essential takeaways: the fight for universal health care in California is far from over, organizing around the issue is making a difference, there are a wide array of ways to get involved, and universal health care locally could help one day make it a reality for the rest of the country. 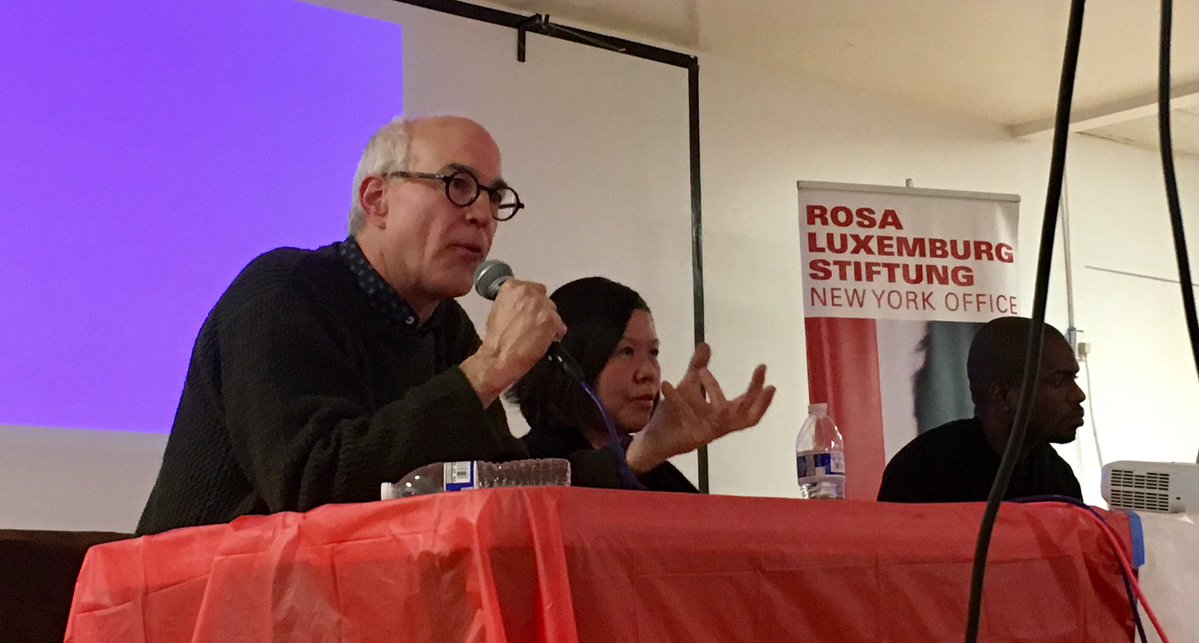 It’s suspended in the Assembly Rules Committee. It needs to be referred to a policy committee - presumably the Assembly Health Committee - in order for it to be considered and amended, if necessary, or otherwise moved through the regular legislative process.

What is his reasoning for holding it up?

His stated reason is that the bill is incomplete. He has also said that Assembly members came to him, particularly moderate members, who did not want to have to vote on the bill. And, he has said the Governor indicated that he doesn’t support it either. Those are the explanations you get.

However, you also can see that he gets significant contributions from the health insurance industry - from hospitals, from pharmaceutical corporations - and those are certainly institutional interests that fund some of these moderate Democrat campaigns in swing districts. There’s clearly a shared interest between those corporate donors and the moderates who don’t want to vote on this bill.

We certainly think that the speaker is trying to protect his moderate members from popular demand for guaranteed health care, and we don’t think he’s going to be able to carry that protection out.

"You’re either on the side of  humanity or corporations."

Is there another option besides the legislative process for passing SB 562?

Yes. The current program is to pass SB 562 through a two-thirds vote of the legislature and get the Governor’s signature.  We would be able to fully implement the program on that basis. It’s likely that should the Governor and the legislature pass it, the healthcare industry would collect signatures and put it on the ballot as as referendum, where the voters would vote up or down as to whether the bill goes into effect.

Our evaluation is that we’re in a stronger political position if we get political support behind it - two-thirds vote, the Governor’s signature, and all the popular mobilizations that will go into that. Then, having prevailed, we go into a campaign where the industry tries to take it away, which we believe that is a more favorable political dynamic.

If we go to the ballot either through the legislature or the signature-gathering process, we saw the pharmaceutical industry spend $130 million-plus against Prop. 61 (which would have regulated pharmaceutical drug prices). We saw the insurance industry spend tens of millions against Prop, 45, which was to regulate rates for insurance. So we can expect a similar deep pocket campaign against us. We’re going to have to raise money, and the question is, do you spend that money trying to qualify SB 562 for the ballot, or do you spend that money defending what’s already passed? We think the second choice is the better place to go.

What do you think the chances are of SB 562 passing at the legislature at this point?

The word we’re getting, somewhat remarkably, is that actually we’ve had a real impact on the Select Committee on Health Care Delivery Systems and Universal Coverage. They’re very nervous. What we’re seeing is surprise, shock, and maybe awe about the fact that this campaign has continued. We haven’t gone away - they basically said it was dead for seven months and yet it’s still going. We’ve been told its dead and yet it’s not dead. I wouldn’t make any predictions right now.

Two things we know: that the Select Committee is writing legislation [[to expand health care in California]]. That means that it’s going to have be compared to SB 562. We think SB 562 will win that comparison. 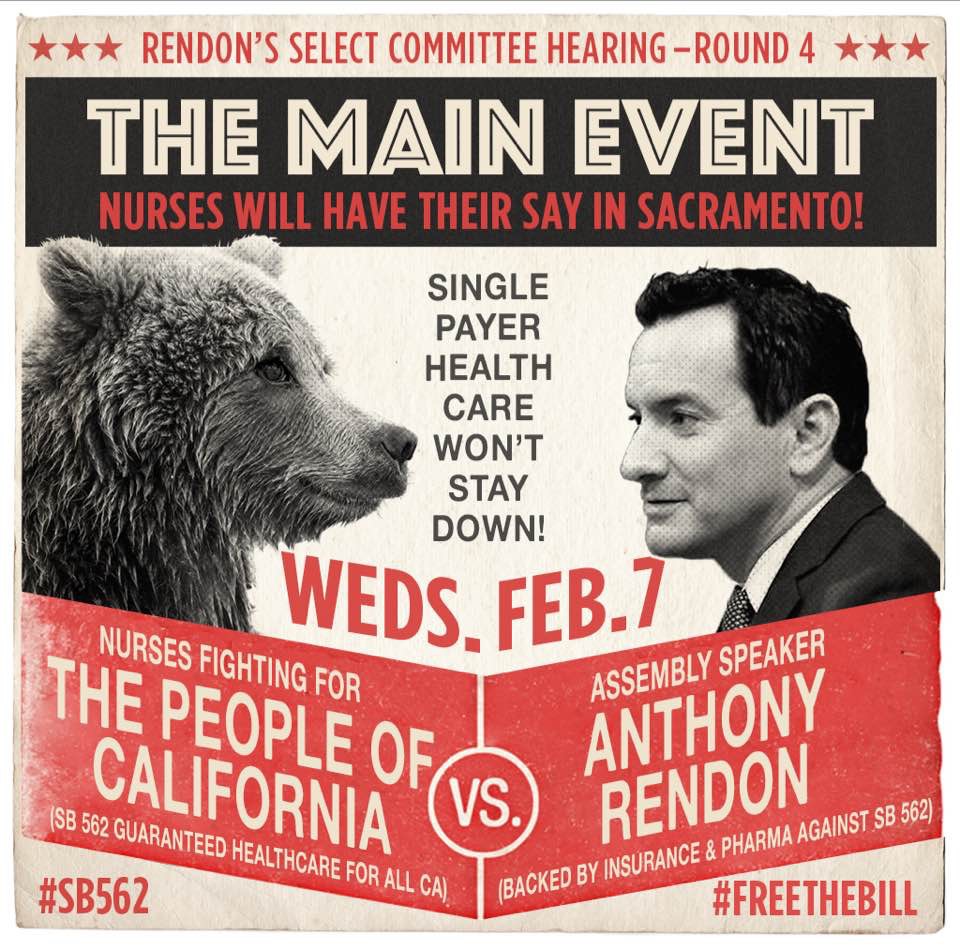 How could people get involved in the fight moving forward?

There’s a lot of great ways to get involved. One is to participate in door knocking in your Assembly District. That’s happening every weekend around the state. You can host a canvass if it’s not happening already in your area.

Letters to the editor - I know it sounds corny, but it’s really important, because the corporate media is bought and sold by these healthcare industry advertisers.  So popular response on the letters page actually makes a difference.

Social media - there’s so much happening in social media to push back on Assembly Speaker Rendon. You can use social media to pressure your local Assembly Member. Retweeting issues that are relevant to Assemblymember Jim Wood, who is the Chair of the Assembly Health Committee, has an impact, as well as pushing back on his lies about SB 562. All those things matter.

And then turning out. We’ve got the next hearing on February 7th for the Select Committee. It’ll be the first time SB 562 is considered in the California Assembly. We had 350 people last time. Let’s get 500 people this time. It could have a huge impact.

The Democratic Socialists of America just released a “campaign in a box” to help those fighting for Medicare for All nationally. How do you see the national fight and California’s fight connecting?

It’s exactly the same fight. What we we need to do is make Medicare for All the defining national issue in 2018 to the greatest extent possible, because it is so resonant with people. It’s the most intimate area of our lives, where public policy has a huge impact.  There’s so much insecurity and uncertainty because of how the Trump administration and the GOP have gone after health care that offering offering workers a way out of that economic trauma by trying to get the health care that people need - it really shows voters which side you're on. You’re either on the side of  humanity or corporations. And Medicare for All is a great way to define that difference.

So number one, we make it a national issue in 2018 - the defining issue. California is central to that. You’ve got leading progressives running on SB 562, so it is going to be a big issue here. If we can win in California, elect a governor who has expressed support for it, and then move the bill, then we’re going to set up 2019 for a fight in the House for Medicare for All nationally. Then in  2020, we can make it a key issue in the presidential campaign, with California really leading the wedge as we move it forward.

If we elect a pro-single payer president in 2020, lo and behold, we have a model in California that we can apply to the rest of the country. So we see these fights as inexorably connected.

Speaking to an everyday Californian, what’s the best reason you can give them for why they should support passing SB 562?

Peace of mind. This is not about fiscal policy or the best scheme for insurance coverage. This is about life and death. This is about people’s everyday security. The message I’d have for working Californians is that you can get the health care you need if we pass SB 562. You’re going to have real health care security, and you’re not going to have any financial barriers preventing you from getting the care you need. Health care is going to be about being healthy, not about making money.