On February 26th, the dreaded Janus vs. AFSCME case was argued before the US Supreme Court. The decision that follows has the potential to undo public sector unionism as we know it and cause wages, benefits, and workplace safety standards to plummet everywhere.

The case was initiated by plaintiff Mark Janus, a public employee in Illinois, who sued his union AFSCME, arguing that mandatory union fees infringe upon his constitutional rights to free speech and free association and that he should not be forced to pay them. AFSCME argued that all employees benefit from the job protections won through union bargaining, so fair-share union fees are reasonable and anything less would give workers who choose not to pay dues a free ride and erode the union’s overall ability to function. 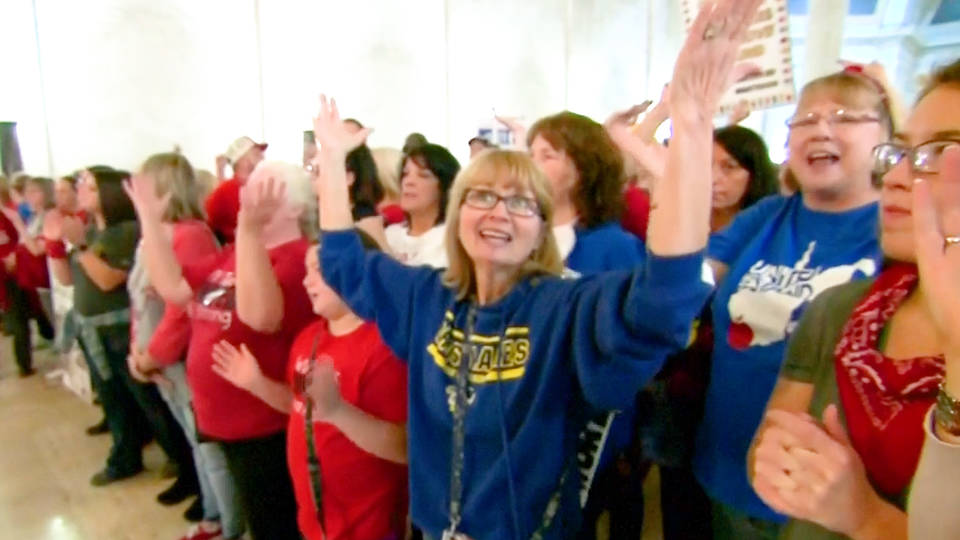 Several states have already enacted laws which prohibit unions from asking for fair-share fees that ensure all employees pay union dues. These are known as “right-to-work” (RTW) laws. One state that has enacted RTW laws is West Virginia.

With weakened public sector unions, a growing trend of business unionism, and statewide austerity measures, West Virginia teachers found themselves living paycheck to paycheck with questionable benefits and shoddy union representation. When their union failed to negotiate a strong contract against an austerity-minded legislature, West Virginia teachers organized their own wildcat strike. The strike lasted for nine consecutive school days and culminated in a victory when the West Virginia legislature agreed to give teachers a 5% pay raise and more.

The West Virginia teachers strike has been inspirational for many, and now teachers in Oklahoma are considering their own strike against dismally low wages and declining per-pupil spending. Arizona teachers also took inspiration from West Virginia, organizing a #RedforEd protest against low wages, bad working conditions, and school privatization, and are even considering their own strike.

"Even under [right-to-work], the labor movement can’t be suppressed."

Many presume that the conservative Supreme Court will rule in favor of Janus this spring, voiding all statewide fair-share laws and instituting RTW across the country. If this is the case, we may see declining wages, higher fees for benefits, and lowered workplace safety standards throughout the entire public sector as a direct result of weakened union bargaining power. What’s even worse: without competition from unionized shops in the public sector, all employers may be free to start decreasing employee pay and benefits, and workers will find themselves in a race to the bottom for wages.

Regardless of the results of the Janus decision, the West Virginia teachers have shown us that it’s still possible for employees to demand higher wages and better working conditions against all odds and even against the law. Even under RTW conditions, workers led a self-determined effort to seize power and won real-world gains for themselves and all public employees in their state. Even under RTW, the labor movement can’t be suppressed.

Extensive analysis and background information is available on the West Virginia teachers strike and the Janus decision:

If you’d like to deepen your labor organizing expertise, consider attending the Labor Notes Conference, which is a gathering of grassroots labor activists who come together to discuss workplace organizing tactics and host workshops.

If you’d like to know more about the labor movement in Sacramento, consider attending a meeting with our Labor Solidarity Committee. Or attend our Beer & Roses Labor Happy Hour to get acquainted with local labor activists.

If we want a powerful and victorious labor movement post-Janus, then let’s find inspiration from our brothers and sisters in West Virginia and start organizing amongst ourselves today. The labor movement begins and ends with us.