News » Why and How Socialists Should Support the 2018 National Prison Strike - Democratic Socialists of America, Sacramento

Why and How Socialists Should Support the 2018 National Prison Strike - Democratic Socialists of America, Sacramento

Colin Meinrath presents the reasons socialists should support the 2018 Nationwide Prison Strike and how individuals and groups can help.

Sacramento DSA will be holding a teach-in on how to support the Nationwide Prison Strike at the General Membership Meeting on August 18th. RSVP here.

Trigger warning: this article includes graphic descriptions of violence and deliberate traumatization that people experience inside prison. To skip all that, start from the how to support section.

Why Support the Strike

Prisons are a weapon in the hands of the ruling class.  Prisons warehouse labor that has been deemed surplus. Specific populations are targeted for policing and prison.  Because prisons are so essential in maintaining the current order, strong solidarity across prison walls is able to galvanize opposition to that regime.  Resisting the institutions used to keep us in line was and is a fundamental part of fighting for a better world.

Solidarity inside prison exists in direct confrontation with administrations, who want prisoners to be in conflict with each other.  Solidarity from the outside gives forces inside room to breathe and grow. We who participate in social movements and labor organizing outside have lots to learn from those who dare to struggle inside.  They put it all on the line and still come away with material gains for their comrades. Ask yourself how many months you’d be willing to do in solitary if it meant your crew could have access to better food or other better conditions.  There are people who did wildcat labor strikes inside just for the dignity of rebelling alone. That kind of spirit is what inspired me to get involved in supporting prison strikes.

The state is actually terrified of solidarity becoming a hegemonic force across prison walls, because that would largely nullify one of their greatest weapons against social movements.  There are revolutionary study groups inside, there are workshops on deconstructing patriarchy in men’s prison. There are hunger strikes and work stoppages that demonstrate collective power by winning real gains in the face of retaliation.  Our power is growing, overall however, prisons remain places where any kind of social rehabilitation is the exception and exploitation reigns, in part because of the sparse support for prisoner struggles from outside.

Prisoners in the U$A who work are paid less for their labor than the average pay in Haiti or Bangladesh.  This hyper-exploitation hurts workers bargaining position on the outside, and without it capital would be forced to pay people more and hire tens of thousands more workers to make everything from clothes to food to furniture.  Angola State Prison in Louisiana is literally made from former plantations and the people there to this day are forced to pick cotton for scant compensation. Even where there is no manufacturing, prisons demand the reproductive labor of imprisoned people in places like the kitchen and the laundry to keep running.  Strikes can cost the state millions per day, and sustaining that would make prison unsustainable.

These days, everyone who’s anyone among the ruling class wants to do some kind of prison reform.  Even President Trump wants to hop on the prison reform bandwagon. This is because of how discredited the drug war and the US prison system have become. We should not let this momentum be co-opted by elite-led reform groups who want to re-legitimize prison. This strike, and the prisoner-led movement behind it, is aiming to amplify the voices that technocrats don’t want to hear: the voices of prisoners themselves. 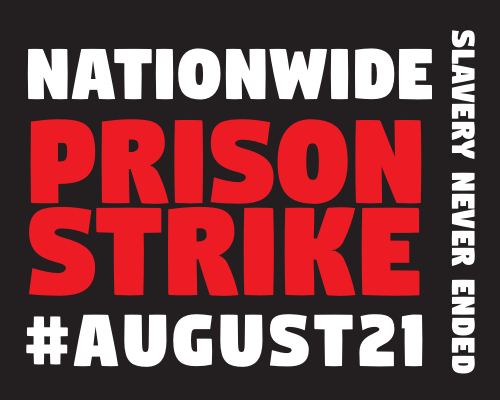 Lies and misconceptions about prison

Before getting to the strike, it’s worth taking just a minute to break down some of the absolute garbage that gets spewed over the airwaves when it comes to prisons.  “Rapists and murderers” is a trope that has little to do with reality. First off, most rapists and predators are never sent to prison because most survivors don't want to have to prove their victimhood to the state and have scant trust for the police when it comes to these issues.  Punishing rape is not as important to the capitalist state as crimes that directly affect profit, so the distrust of the criminal (in)justice system is warranted. Secondly, people with these and other scary, sensational convictions make up a tiny amount of the overall prison population.  Harsh punishment in the wake of man-slaughter or murder fails to make the situation less tragic, and often makes it more so. For instance, someone told me about a young woman who accidentally killed her sister by crashing the car they were both in, then got sent to prison. Many gang murders are committed by and against youth who’ve been failed by the world at a young age and who feel like they have nothing to lose.  Many women convicted of murder killed their abusers. Overall though, the prison population is made up of people who committed either drug crimes, property crimes or other rule-breaking that allowed for their own survival on the periphery of the capitalist system. As one of my comrades says, “the rapists are on campus and the murderers are wearing uniforms.”

Prisons are to public safety what the Titanic was to seafaring.  They do not come anywhere close to resembling the messaging and ideology used to sell them to the public.  Grouping people in unsafe, unsanitary and generally hostile environments produces and reproduces social patterns that play out as victimizing others, especially along racial and gender lines.  Massive stigma and legalized discrimination against people branded as criminals forces people who want to adjust back into the world to seek extra-legal ways of making a living. In this respect prisons are a social illness masquerading as a cure.

The first ever nationally coordinated prison strike took place in September 2016 at about 26 facilities.  Mass prison strikes also took place between multiple facilities in 2013 in California The retaliation for mass insubordination in prison is often for those deemed ‘ringleaders’ to be thrown in solitary for months or years.  At times, it can be even worse. At Kinross Correctional in Michigan, striking prisoners were zip-tied and left outside in the rain overnight. People in prison are constantly threatened and humiliated. Guards get away with everything from beating up people who talk back to them to the literal murder of people like Sandra Bland and George Jackson.

The 2018 strike call was made by people inside after a massacre was engineered by guards at Lee Correctional and labeled a ‘riot’ by the feckless capitalist media.  What really happened was rivalries stoked constantly by guards through spreading rumors and other means, boiled over in one of the dorms. Then guards just sat and let it play out.  People literally bled to death on the floor and they did nothing to help them or to break up the fight for hours. Incidents like this are a result of prisons and the people running them much more than it’s a reflection on the people being imprisoned.  Malicious mistreatment like this is what makes prisoners feel compelled to unite and risk it all against the system that thrives on keeping them divided. New struggles, same old repression playbook.

When mass resistance takes place inside, solidarity means public pressure against the same institutions that people on the inside are resisting.

When mass resistance takes place inside, solidarity means public pressure against the same institutions that people on the inside are resisting.  We need to call them up and repeat striker demands. Doing this alone is incredibly important and can result in real relief for people facing repression inside.  Keep in mind what prisoners are risking by going on strike and keep an eye out for ‘phone zap’ actions.

Help the strike reach as many ears as possible.  In 2016 there was a near-total media blackout and prison administrations always try to cover up the situation or just flat out lie.  We can’t let them get away with that this time! This ask especially goes out to people who volunteer or work in media of any kind. Get them to cover prison more responsibly and not just swallow the state narrative whole!  But for the rest of us, banner drops, leafleting, posting and just plain word of mouth all have a part to play as well. Paper handouts can be found here (https://iwocoakland.wordpress.com/2018/06/07/national-prison-strike-support-pamphlet/) and here (https://fireinside.noblogs.org/2018prisonstrikes/)

If you are in a union, please get your local or your workplace to endorse the strike and / or offer support.  This makes a big difference and some people inside have expressed a desire to work with the recently re-invigorated labor movement of teachers and educators in particular. You can view all current endorsements and register any group or organization in solidarity at this site: http://sawarimi.org/national-prison-strike.

Writing to people involved helps.  Getting letters of solidarity has been life-changing for people who joined a strike, especially when they may have led lives in which respect and kindness were hard to come by.  Any contact a prisoner has with the outside helps make guards and administrators think twice before messing with them. Additional lists of people to write to may be forthcoming in the weeks or months to follow but for now check out this list of movement prisoners and active inside organizers (https://fighttoxicprisons.wordpress.com/eco-and-animal-liberation-prisoners/)

Other than that, the best ways to show solidarity are to be proactive, reach out and offer some help to other genuine prisoner-aid groups or groups supporting the strike in your area, which could be anything from re-entry services to books to prisoner projects to Anarchist Black Cross groups.

Things not to do

- Fundraise off of the strike from the outside

- Take a ‘missionary’ approach towards engaging with prisoners.  We have lessons to learn from their struggle, and humility is among them.

Long-form story on the tragedy at Lee Correctional:

And this other interview: https://itsgoingdown.org/inside-outside-all-on-the-same-side-prisonstrike-round-table/