The Green New Deal/Let’s Own PG&E campaign’s goal is to build a mass movement for a public and worker-owned  PG&E, to join it to the Green New Deal, ultimately creating public and worker-owned green energy as part of climate justice. YDSA UC Davis and Sacramento DSA are coming together to support Northern California DSA chapters from Chico, San Francisco, the East Bay, Fresno, and Silicon Valley; together with Diablo Rising Tide, Communities for a Better Environment and others. 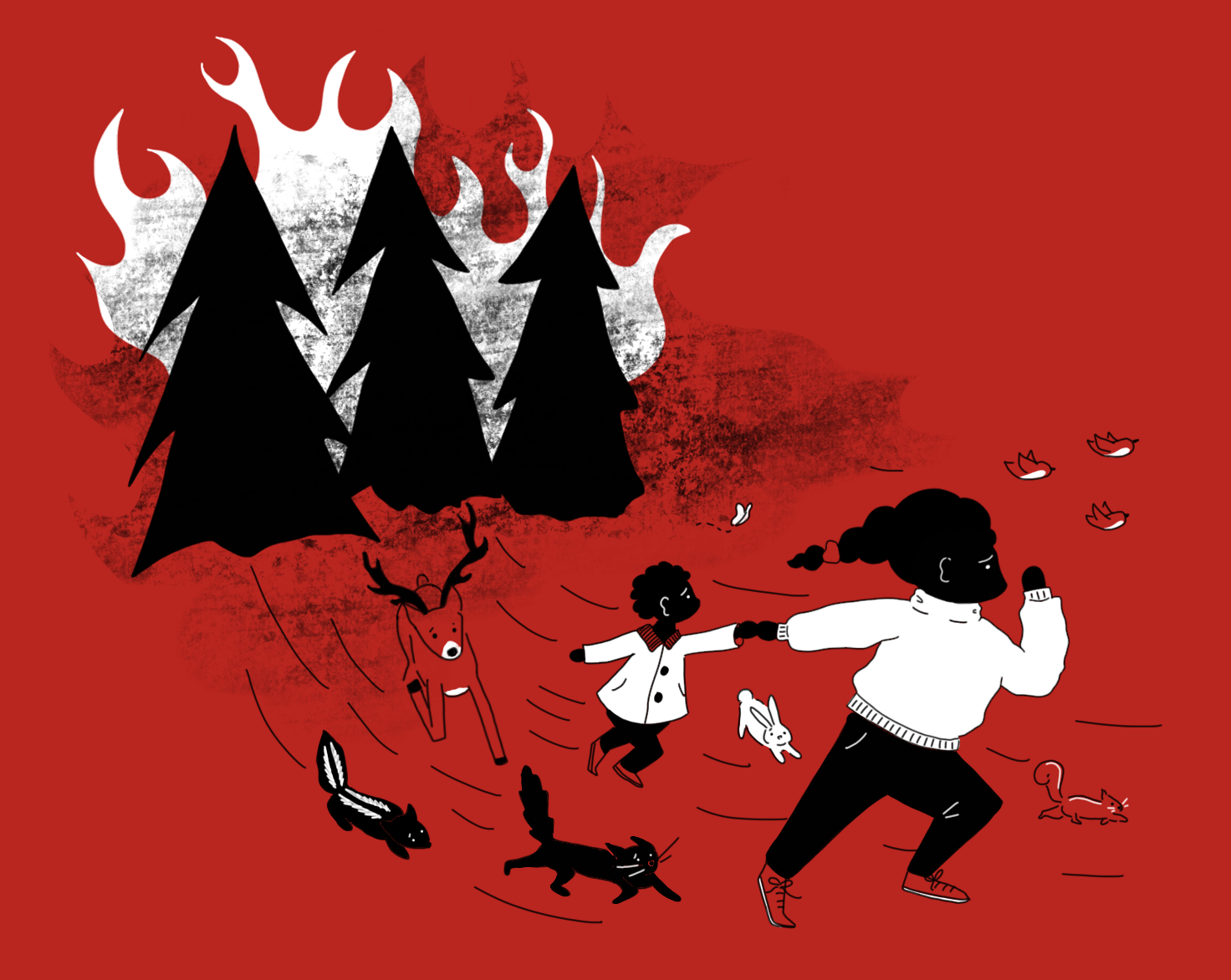 The Illusion of Powerlessness

It was just last quarter that we were afraid to exercise, walk our pets, or even go outside at all, let alone to classes or work. All of this because of the apocalyptic fires sparked by an unrepaired PG&E transmission line. Meanwhile, neighbors north of us died in fear or had to flee the ruins of their homes, transformed overnight into climate refugees. The climate crisis can be hard to get your head around because of its seemingly superhuman scale - until it hits home like this. And as we all know, it’s only going to get worse. What can we do to fight for a safe future here in California?

Until recently, it was still possible to imagine the climate as a “cause” or a hobby, like being obsessed with a specific type of tree frog. Until around the end of the 20th century, you could still think of the environment as a concern for outdoorsy people; the forests, rivers, and glaciers were places that only concerned wild animals and backpackers. It is now clear that this view is bonkers. Those photogenic forests, rivers, and glaciers are also the sources of the air and water everyone in the world survives on. It’s like seeing vegetable farms or car factories as fairylands irrelevant to anyone except agriculture professors or auto engineers, except worse: you can find different food or transportation, but when the air and water go bad there’s nowhere to run. But the causes are not cosmic—the problem is the result of a concerted human effort. The solution needs to be human-driven too.

Climate science is now unanimous that climate change is the defining crisis of modern civilization. It was caused by the forces that enabled modernity, and it will end civilization if unchecked. Specifically, massive carbon extraction made modern, “first world” progress and abundance possible by providing seemingly limitless energy, but now it is on a direct path to bring it down (for a short version Mitchell, “Carbon Democracy” article). Fortunately, the problem is political: it was caused by corporations and states organizing activity on a massive scale. This means it has the same solution: massive political organization by people using the political power of states to reverse it. The task is ambitious, but it’s preferable to the alternative.

The power of bold politics to change our sense of what is possible and fight the climate crisis is clear. In the space of less than a year, a concrete solution is on the table in the form of a Green New Deal plan. It was proposed by Democratic Socialist congresspeople like Rashida Tlaib and Alexandra Ocasio-Cortez,  and it is supported by the Sunrise Movement, The Democratic Socialist of America (DSA) and many others. Because it is necessarily a giant-scale jobs and social safety net program as well, it tackles a variety of contemporary political concerns (“we need jobs and healthcare before we can worry about rivers and air”) at once.

The problem is not a bad year or a few accidents but PG&E’s basic shareholder-driven method of doing business:

The Green New Deal/Let’s Own PG&E campaign’s goal is to build a mass movement for a public and worker-owned  PG&E, to join it to the Green New Deal, ultimately creating public and worker-owned green energy as part of climate justice. YDSA UC Davis and Sacramento DSA are coming together to support Northern California DSA chapters from Chico, San Francisco, the East Bay, Fresno, and Silicon Valley; together with Diablo Rising Tide, Communities for a Better Environment and others.

There are three demands:

The immediate goal is the first phase, which is in full swing: regularly showing up to CPUC meetings to let them know that the outrage at the destruction of entire communities has not diminished and that there is growing support for a real public utility. The next phase is to engage with the California legislature.

Physically, the energy distribution system has two main parts. There are big, long-distance transmission lines (these go through a lot of remote territory like forests and are usually the culprits in fires—which is why less centralization means less fire vulnerability). And there are smaller, shorter-distance distribution lines, some of which are safer but more expensive underground lines.

The business function of PG&E is billing and metering (everybody pays  PG&E directly or indirectly except if you're on the island of Alameda) and procurement. This part is, again, surprising because  PG&E is mainly a reseller of energy -- not a creator. In this system, power producers sell energy to the highest bidder, in a sort of a high-tech auction made infamous by companies like Enron. So  PG&E buys a lot of their power from plants in Nevada and Southern California. Again, this is a highly centralized and non-resilient system that pushes high voltages over dangerously long distances.

Is PG&E a “public utility”?

The term “public utility” is deceiving; PG&E is a shareholder-owned “private-public” utility corporation - a perfect example of socialized risk and private reward. Another startling aspect of the business is that PG&E makes much of its money by building things on a cost-plus model. This is the same subsidized model that Iraq War profiteers like Dick Cheney’s Halliburton used. Unlike in normal businesses, the state guarantees them a percentage of profit on all their capital investment. To take an extreme but possible example, if  PG&E spent $1 million to build an outhouse the state would pay them $1 million plus an additional fixed percentage of profit.

And the “public” part of PG&E is something of a façade. What guarantees them profits out of each regular Californian’s income is the fact that they are supposed to be publicly regulated by the California Public Utilities Commission. But who is CPUC responsible to? The accountability of the board that “governs”  PG&E and sets its profits is a big problem because CPUC is Governor- appointed, not elected. Gavin Newsom has received major donations from PG&E, so he is unlikely to take a strong stand to fix the problems they cause.

Where is PG&E now? This month the company filed for Chapter 11 Bankruptcy. This type of bankruptcy allows the business to reorganize rather than forcing them to go out of business. Chapter 11 is a lengthy process in which a judge decides on a plan. It is totally possible for it to include little or no real compensation for the people hurt by fires ( PG&E already went bankrupt in 2001 due to Enron, and it took til 2003 for the judge to create a plan that did little to improve things.  PG&E gave a bit of its money to environmental initiatives but passed most of their debts on to ratepayers.) Meanwhile, its 23,000 employees, mostly in unions, are at risk because their contracts, pensions, and healthcare could go up smoke. We are fighting to make sure the workers and affected people don't get hosed, and that PG&E becomes truly public - so that this doesn’t happen again.

Now is the time for pressure.

CPUC has stated that they're investigating taking  PG&E public. And PG&E is a good deal right now! Their stock has dropped so much you can buy it for pennies on the dollar. The California legislature has decided not to renew last year’s bill SB 901 which bailed them out last year—the terrain is already shifting, we just need to push it further!

The next CPUC meeting is this Thursday January 31st, 9:30am at the Victims Compensation Board in Sacramento, and multiple DSA chapters and other activist groups will be coming! YDSA is also taking a contingent from Davis. Please join us and make your voice heard.