The mission of the Sacramento DSA Racial Solidarity committee is to fight systemic racism and build solidarity with and support for oppressed and marginalized people in the Sacramento Region through education, direct action, and mutual aid. We are committed to bringing an anti-racist lens to all work that Sacramento DSA engages with, and to provide tools for educating ourselves and our community on anti-racist work and theory. 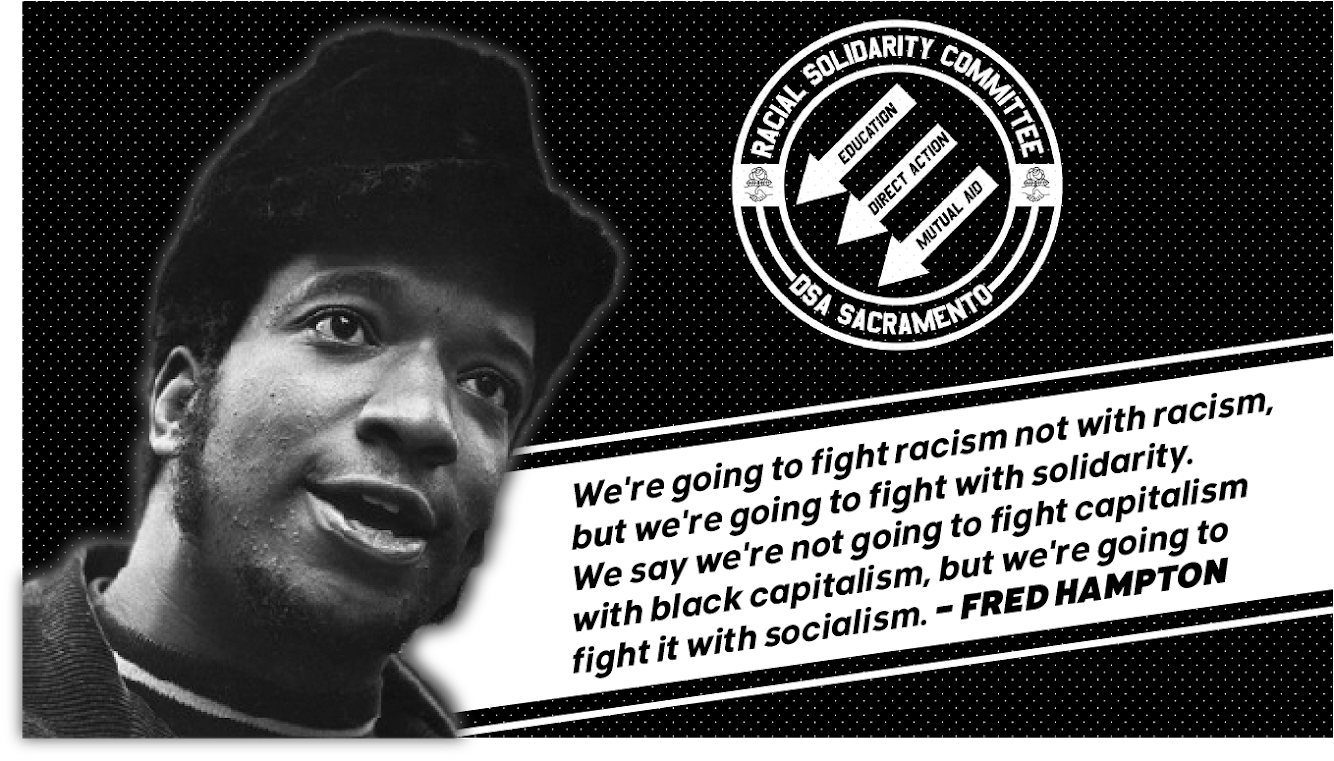 Sacramento, like the rest of the United States, is deeply unequal. People of color - particularly black, indigenous, and latinx folks - face substandard education, housing, healthcare and employment while simultaneously being disproportionately surveilled, arrested, and killed by law enforcement. As Socialists, we recognize that this inequality is a result of centuries of slavery, segregation, and economic dispossession used to maintain white supremacy. We further recognize that global capitalism is predicated on the maintenance of racism and that the liberation of all working people will only come as a result of its dismantling and equitable replacement.

This legacy is perpetuated through a political and economic system dependent on cheap labor, extracted from a racially divided and disenfranchised workforce. As is the case for the entire US working class, black and brown workers are continually subjugated through a lack of equitable compensation for their labor. However, the compounding oppressions placed upon black and brown workers further inhibit working class organizational capacity and therefore necessitate an intersectional approach for socialist organizing. Economic struggles for full employment, unionization and universal healthcare are inherently anti-racist and feminist, just as opposition to police violence, far right militancy, and racial discrimination are also economic struggles.

We must engage in struggles directly challenging the status quo and organize our people and resources to promote movements. This includes organizing and mobilizing against over-policing and state-sanctioned violence in black and brown communities, the rising threat of far-right extremist violence against working class immigrant and muslim families, the state’s oppression and surveillance of refugees, and all other physical and economic threats facing working families resulting from racism and xenophobia.

We additionally seek to build bridges with communities across Sacramento whose needs are not met by the current capitalist regime, whose neighborhoods are occupied by racist police, and who are faced with the uncertainty of creeping gentrification. Our mutual aid projects are an opportunity to talk with more workers, build understanding between diverse communities, and directly address people’s struggles within their own neighborhoods.

Finally, our educational efforts are directed internally, to give DSA members a deeper history of antiracist struggles while challenging our own oppressive behaviors. Externally, we will engage the public with events that highlight the nature of the system and share inspiring stories of those who have challenged it before us.