News » Thoughts on Medicare For All Canvassing - Democratic Socialists of America, Sacramento

Thoughts on Medicare For All Canvassing - Democratic Socialists of America, Sacramento

Last weekend, I spent a couple hours in front of the McKinley Library, talking to anyone who would listen about Medicare for All. Part of a “crowd canvass” organized by a former cancer patient called to action by her expensive medical bills, the event taught me a few surprising lessons. While I started the day skeptical of how much concrete impact such efforts really have on the political fight for universal healthcare, I ended the day understanding that when building a movement, concrete impacts sometimes take a back seat to connecting with people face-to-face. 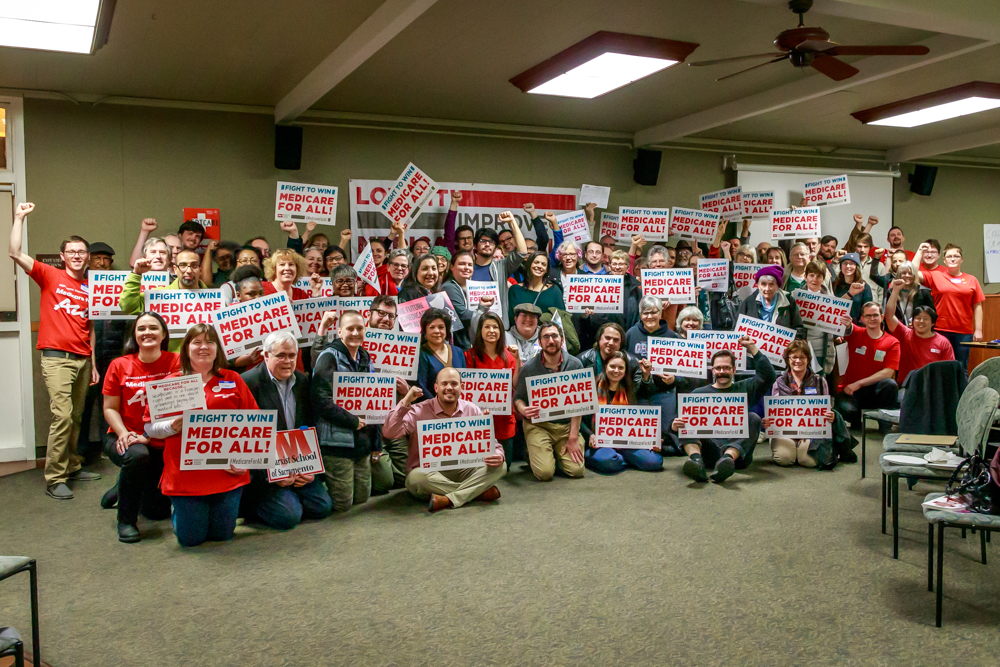 In the past, the purpose of canvassing for Medicare for All seemed vague to me. As a national effort that requires Congress to approve it, I couldn’t figure out what my “ask” would be of people I spoke to about universal health care. Sign a petition? Those didn’t seem to work. Call a representative? I live in the foothills, where our right-wing representatives have as much chance of voting for Medicare for All as they do feeling human emotion.

But the canvass I attended in Sacramento had a couple things going for it. For one, Rep. Pramila Jayapal recently introduced a Medicare for All bill the House, providing a concrete proposal we could ask people to support. More importantly, while local Rep. Doris Matsui claimed she supported universal health care in the past, she has yet to sign on to the new bill, giving us a solid ask: call your representative and ask her to sponsor the bill.

A few conversations into my day, however, I began to wonder how important a specific bill or a specific ask really needed to be, when there were so many benefits to simply talking to people.

Some people just wanted to share their own passion for the topic. They believed strongly in Medicare for All, and told me their own story of how they’ve arrived at this perspective. A mother of one of the Girl Scouts tabling next to us talked about how she taught her daughter that “everyone deserves health care, just like air and water.” An elderly couple raged against the rising price of insulin. And a number of people said “you don’t need to convince me,” but then spent some time getting convinced anyway.

At first, these conversations may sound like preaching to the choir. But several of these people signed up to receive updates from the campaign, and perhaps seeing actual people out promoting Medicare for All will inspire them to get involved with making it happen in the future.

In these conversations, I felt that face-to-face interaction created more trust in what we had to say compared to, say, looking up the bill online. It also helped that one of us was a nurse, another a cancer patient: two people with plenty of experience navigating the waste and cruelty of our current healthcare system. It also simply seemed to matter that we were breathing humans, not faceless icons on Twitter or angry Uncle Jeffrey screaming on Facebook.

My favorite conversation of the day involved a woman who had never heard of Medicare for All. She remained dead silent as I made my pitch. She stayed silent whenever I paused, so I kept plowing on. I finally ran out of gas, and asked her if she had any questions. “That sounds...great,” she said, then marched over to sign up for more information.

There were a couple rude people. One guy waved me off like he was shooing away a dog. Another woman spent a while trying to convince me that our system works perfectly the way it is. And overall, the day was exhausting. After about an hour and a half, we all began hanging back a bit, taking rests on a nearby bench as the psychological toll of talking to complete strangers about a complex political topic over and over again grew.

But in the end, I realized my skepticism about canvassing had been based mostly on putting the cart before the horse. I wanted universal health care so badly, I focused on the end game - how to get enough votes in Congress to approve it and a President who wouldn’t veto it, how to ensure we had a specific ask that would directly affect its chances.

But there’s no way to get from here to there without building a mass movement. And that simply isn’t going to happen without a whole lot of conversations that don’t end in an ask.

Just as importantly, it’s not going to happen online. Too many of us aren’t interacting there, and those that are often already have their minds made up. The brave act of real conversations revealed itself to me as one of the most powerful weapons we have. Even showing the public we cared enough about this issue to stand in front of a library on a sunny Saturday may have convinced a few more people to support Medicare for All than the most epic dunk on a right-wing Twitter goon.

It’s not for everyone. But in the end, my advice is to give it a shot - if not for the movement, then for your own well-being. You’ll probably meet strangers that want to talk about something you’re passionate about, and the faith they express in universal health care will renew your own commitment to the cause, as it did mine.